I have a 22-piece big band swing/jazz group called William and the Romantics. When we play a gig, my band director sends us a set list (see image below) that he created using some sort of office automation tool.

I would like to automate this for my band director so he can jump on our personnel site (which is up and running thanks to your help!) and just fill out the information for upcoming gigs. I think I need an intelligent form tool for this. I am very happy with the extensions that you have recommended so far. Maybe there is an extension that will work? Read on.

As you can see from the set list example, there are several use cases I'd like to capture:

(1) We have four singers who sing different tunes during the gig. Each of the singers' material is color-coded so they can easily tell which song is up next (they hang out off-stage when they are not singing. All songs that do not have a singer have no color added to them: they are listed in black and white

(2) Each song has a duration. My band director is an ACE at setting up set list durations that come in right on time so that we get even breaks. The "Mercury Cafe" location that we play at has two sets with one 15-minute break in the middle. Downbeat is a 8, we play till 10:30, so band director needs to fill 2 hours 15 minutes with song durations.

(3) There is a list of alternate songs. This is hugely helpful in the event a singer has an emergency and has to take the night off (which has happened before).

(4) Our band director then emails the set list to everyone on our standard email list (which currently resides in a variety of stakeholders' Gmail or Mac mail accounts in a local email group they have created. However, if he is not aware that we have a sub or two, he might miss them. Yes, we have had subs show up looking for the chart books. Ai-yi-yi! (Thank God for ForScore and its Android cousin MobileSheets.)

So...the set list form needs to have some intelligence to it. Only the site admin (me) and the band director need to have access to it. It's not an end-user thing, it's an intelligent form thing that goes into action when we need a set list.

I am technical enough that I think I could tackle an extension that would do these things for me. I just don't know which extension might fit the bill. I have one that I'm trying to use right now that I paid $30 for a 6-month (!) subscription, and it is not going to meet my needs. Is this a Joomla thing, to have subscriptions expire every half year?

I'd rather not have to write code if I can help it. I can write code, but, honestly, if there's an extension that will do what I need, I'm happy to go with that instead. 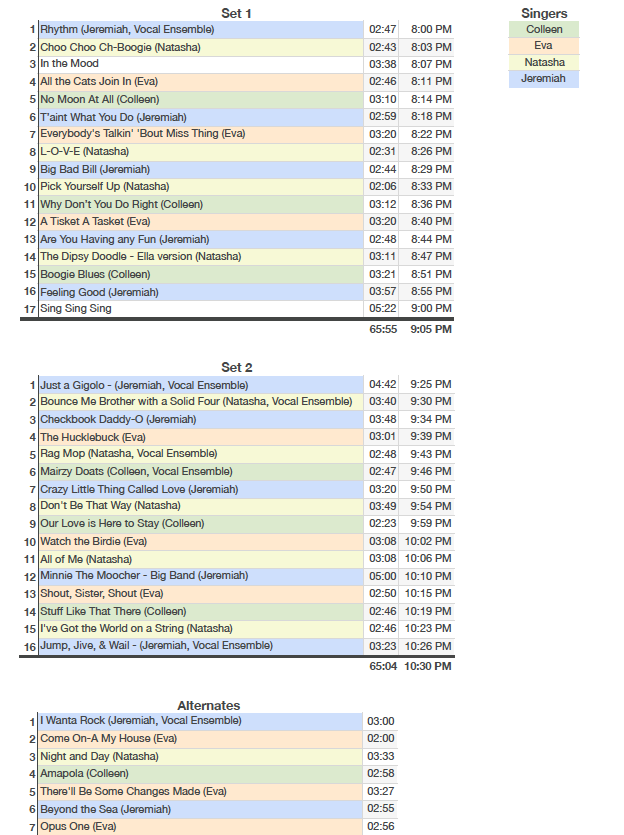 Your scenario is most suited for a custom component. Also, I'm not aware of any particular extension that can do what you need mostly out-of-the-box.

That being said, I can see your form being built in RSForm Pro, with some (maybe a lot of) coding labor.

With RSForm I was able to make a 80 questions online test, with custom play-once audio questions, and a custom color coded answer sheet for the teacher evaluating the test results. It took me a couple of days, half of it for data input, but it works like a charm.

You will need to create the tables for both singers/subs and for songs. That table can be fed from a separate form in RSForm Pro as well, or manually via PHPmyAdmin.

The RSForm docs site has a lot of documentation on how to achieve most of the things you need, and you may need to do some research on your own, but everything you need is achievable.

Since your gigs have a limited duration (around 2:30hs), you know the maximum number of songs that can fit into this period, so you can add that number of forms (as far as I remember, there is no way to add fields dynamically in RSForm).

The color coding will be handled by quite a bit of jQuery. I think most of the coding here is pretty basic.

When you start exploring the possibilities of RSForm, you may even add some extra nice things that were in your wishlist.

Not the answer you're looking for? Browse other questions tagged or ask your own question.

5
How to display multi-day multi-track conference on Joomla with an emphasis on maintainability
1
How to track separate QR codes on the same website?
4
Is there a way to prepopulate a 3rd party form with data?
0
What kind of extension should I use in order to build a back-end GUI to edit parts of the theme?
0
Update screen turns white when initialising an extension update
1
Upgrading an Old Joomla 2.5 Site to 3.x Version
4
Front End Management of Joomla Users
1
Restrict access to your paid extension
0
Free Joomla extension that can read and write in a MySQLi database, with sanitization